The pages in this section are designed to act as a guide for those interested in using the Charlottesville/Albemarle MPO’s Eco-Logical tool for analyses. The Tool, which is referred to as the Regional Ecological Framework, or REF. Is a GIS based tool that allows a project’s potential environmental impacts to be assessed and compared to other projects or project scenarios.

The tool was developed with financial assistance from the Federal Highways Administration and is based on a framework developed by FHWA that was adapted to local constraints and considerations. The tool consist of a rasterized heat map that through analyses identifies areas with the greatest conservation need. This functionality allows those involved in project development to quickly identify areas that should be avoided like wetlands, floodplains and endangered species habitats.

Utilizing standard GIS software the REF dataset serves as a base for conducting several different kinds of spatial analyses. The analyses methods include the ability to identify areas of high resource concentration in the PDC. The ability to score and compare potential environmental impacts associated with various kinds of land disturbing projects. This analyses can be easily performed and can be used during project planning to help identify ecologically sensitive project alternatives.

The Tool and Datasets 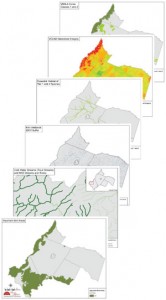 TJPDC’s Regional Ecological Framework tool or REF was developed by TJPDC staff with the assistance of a panel of experts. The tool consists of a GIS Raster Dataset that provides a PDC wide score for habitat value and the concentration of environmental resources. The raster dataset is made up of 30 by 30 meter cells. These cells each have a numeric value that range from 2 to 52. These values provide the means for identifying and mapping what areas in the Planning District have higher or lower ecological value.

The smallest unit of information in raster data, usually square in shape. In a map or GIS dataset, each cell represents a portion of the earth, such as a square meter or square mile, and usually has an attribute value associated with it, such as soil type or vegetation class. -Source: ESRI

A spatial data model that defines space as an array of equally sized cells arranged in rows and columns, and composed of single or multiple bands. Each cell contains an attribute value and location coordinates. Unlike a vector structure, which stores coordinates explicitly, raster coordinates are contained in the ordering of the matrix. Groups of cells that share the same value represent the same type of geographic feature. -Source: ESRI

Close
The tool was created by combining 10 separate habitat related GIS datasets into a single raster layer. To do this each dataset and subsequent attributes were given a rank between 2 and 10 by a panel of experts. More information about the methodology for combining the datasets is available in the Eco-Logical: Integrating Green Infrastructure and Regional Transportation Planning Report.