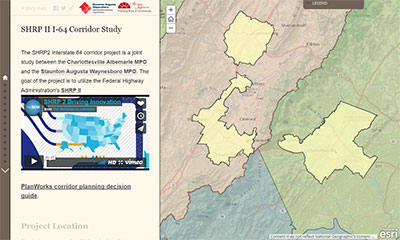 The project is made possible by funding provided by FHWA SHRP2 Implementation Assistance Program. The corridor study focuses on using the PlanWorks Decision Guide to inform the corridor study process and increase cooperation and collaboration between agencies and localities

The draft corridor plan and associated appendices are available for viewing via the links below.

Why do the study?

The Interstate 64 corridor between Charlottesville and Staunton was constructed in the 1960’s and has been incrementally upgraded over the intervening years. However, the roadway still remains primarily a four lane rural interstate. As the regions at either end of the study area have grown so has the demands on the roadway. Demographic and social trends have resulted in a significant number of commuting trips utilizing the corridor as people make their way from home to work. This demand mixed with increasing freight and through traffic demands have resulted in a number of high profile traffic incidents and road closures. Furthermore, the corridor passes through three VDOT construction districts and four regional transportation planning districts (two MPOs and two Rural Areas). This structure has resulted in a number of parities having interests in the corridor but infrequently working together to look at the corridor holistically.

With this landscape in mind the TJPDC and the CSPDC saw an opportunity to begin to increase cooperation between the regions. Initial ground work was laid in 2015 when the MPOs came together for a first of its kind in Virginia joint MPO Policy Board meeting. At the meeting the seed was planned to formalize cooperation and look for way to improve regionally beneficial planning. In 2015 TJPDC submitted an initial application the FHWA’s SHRP2 Implementation assistance program and was awarded a grant for $100,000 to implement SHRP2 corridor planning PlanWorks components.

The study is being guided by the Policy Boards of the Charlottesville Albemarle MPO and the Staunton Augusta Waynesboro MPO who will be meeting jointly three times during the study. Information about joint meeting dates and scheduled is available at the CA-MPO or SAW-MPO Policy board web pages. The Policy boards and MPO staff are being supported by a working group whose membership includes representatives from VDOT construction districts, MPOs, local government staff, and experts from state and federal transportation agencies.

What will the study do?

The Charlottesville-Albemarle MPO’s 2040 Long Range Transportation Plan looks ahead three decades to assess future transportation projects vital for our region. The plan considers all modes of transportation including highways, roads, bus, rail, bicycle, pedestrian and air. This planning process updates the 2035 United Jefferson Area Mobility Plan (UnJAM 2035), which was approved by the MPO Policy Board in May 2009.